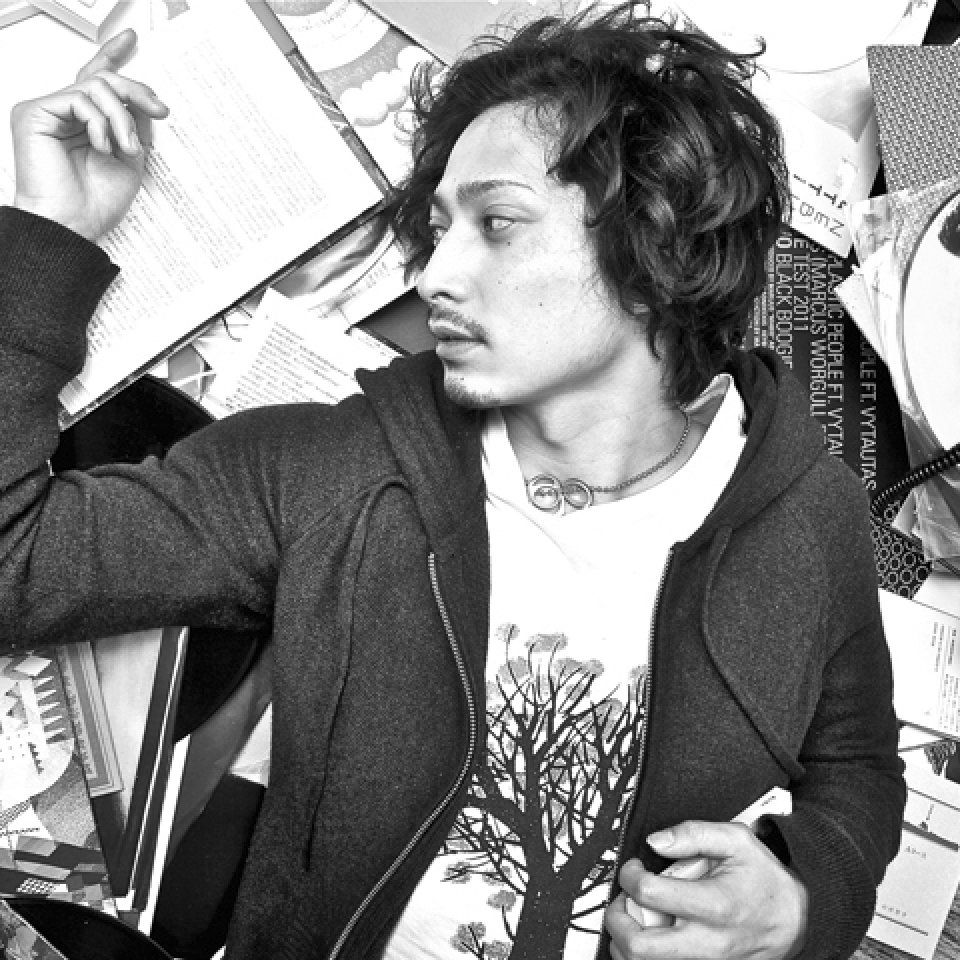 Iori Wakasa was born in the small island's regional cities, surrounded by sea and mountains. And He grew up in a house that flows some laser disc of classic from childhood, to touch the keyboard for the first time in the 3-year-old. He was interested in to play the piano in earnest to 5-year-old, were being drawn into the electronic sound through the game music under the influence of his father at that time as well.
He devoted As the years roll on the piano that can be used to infiltrate freely feelings and sensitivity. Beside him, he had been fascinated with the spirit of the Rock especially Punk Rock. And he opened his eyes to Addictiveness of a deep and energetic dance music, such as house and techno, music and black music.
He knew the Tokyo's night club life at the age of 15, and was deepening the sensitivity further.At the age of 17, he started the DJ impressed by Detroit Techno, Chicago House and the Asian folk music, and became indispensable in the club scene of Tokyo detonated its sensitivity immediately. And he promoted the piece to the stage "DTM" inevitably.
His mix set spun out a vortex of sound world organic on the floor with his technique of the one and only mixing wide range of sound such as House, Techno, Jazz, Funk, Down Tempo, Nu Disco, Chill, Breakbeats, Ambient , interlaced with the "chaos" and "sophistication" in the axis "that pleasant". When the audience contacts as his music on his inner surface, they can experience the supernatural underground space as deeply wrapped warmly in a magnificent forest.
Last three years he was doing over 450 DJ gigs, and was on a Europe tour of 10 performances gig over four countries in 2010, 2011. In Germany he was booked with Sis, Kollektiv Termstrasse, Format;B, youANDme, etc…in Frankfurt and appeared in the 27th anniversary party of Club Airport, which mobilized 6,000 people.
And he also appeared in Nature One Festival which is the Europe's largest outdoor festival that mobilized 65000 people, he swallowed a wave of Kyoki a cloud of more than 3,000. He is also often booked to various outdoor Festival, such as KAIKOO POP WAVE FESTIVAL, Ringo music festival, and the party in the regional cities across the country. In even outside of Europe such as Indonesia and Korea, he also successed his performance. And In 2014, he already has The DJ tour in South America,and Europe.
Immediately after he started to produce his talent was found, and his first track was released from Shin Nishimura's "Plus Records". And he has released the track after another, starting with it.
His music reflects the warm and rich fellowship in the brain addictive groove and raw humanity of his own with Hard softness and and delicate, organic and is entangled in a complex.
They gained a lot of evaluation the Remix work as well as original music, and the offer to him never break.His tracks were played heavy in Official Radio Showcase of Get Physical so far, and his works are played and given some great supports from eminent great artists all over the world, such as Richie Hawtin, Nic Fanciulli, Luciano, Kerri Chandler, Move D, Dyed Soundorom, Lee Foss, Pezzner, Alex Celler, Dubfire, Reboot, Robert Owens, Steve Lawler, Daniel Wang, Florian Kruse, Kolombo, Robosonic, Gorge, Slam, Shur-i-kan, Sante, Robert Babicz, Move D, Paco Osuna, Robert Grant, Mirco Violi, Andre Crom, Robert Dietz, Francesco Bonora, Satoshi Fumi, and Franco Bianco…etc.

In June 2013, his own 1st 12inch EP Vinyl is released from emerging label eMBi Music of Frankfur,Germany with remixer "Pezzner" and"Alex Celler" who raved about Iori's tracks. It is already played and given some great supports from eminent great artists all over the world, and he successd his release tour in Japan that is 8 cities tour of Tokyo, Osaka, Nagoya, Nagano, Omiya, Enoshima, Okinawa, Okayama. Iori is early twenties still, but his record release 2nd, 3rd, and 4th also already determined. At last , in 2013 he will open his own analog label "Leaves Records" with his sworn partner Miki Shinichi which laid out the entire surface of their own sense of music.
His many works of upcoming announcement are much anticipated.